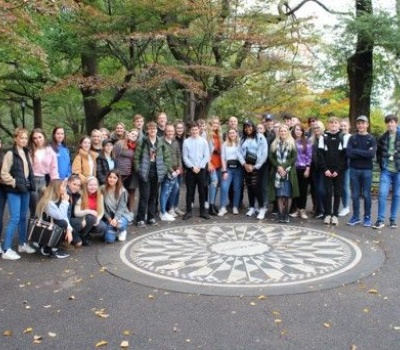 Students had the holiday of a lifetime in New York

Bright and early on Sunday morning, thirty students and six staff set off from Ridgewood to New York. They arrived and immediately set about sightseeing, eventually covering almost 30 miles during their stay in the city.

On Monday the group visited the Guggenheim Museum after walking through the beautiful Central Park to view the Alice in Wonderland statue and Strawberry Fields, the memorial to John Lennon. They then headed for lunch at the Hard Rock Café in Times Square, followed by some shopping at Macy’s. A cruise on the Hudson River to see the sights of New York completed the afternoon. In the evening they went to the Ambassador Theatre to watch Chicago and ate at Planet Hollywood.

Tuesday saw another early start as the group explored the American Museum of Natural History and ate lunch at the very chic Chelsea market. They then visited the 9/11 Memorial Museum before taking the elevator 70 floors up to the Top of the Rock to see the sights of New York, despite the overcast weather. In the evening, the group ate at Bubba Gump's and visited Madison Square Gardens to watch an ice hockey match.

Wednesday began with the group being greeted by a hip hop artist called JDL from the Cold Crush Brothers group. He was part of the Hush tour company and the group learned more about hip hop before touring the Bronx and Harlem and visiting the Yankee Stadium.

Huge thanks to Miss Proctor for leading the trip, to Miss Walker for her organisation, and to Mr Wilson, Mrs Thorpe, Mr Moran and Mrs James for giving up their half term holiday to make sure the students all had a great time. Credit is also due to the students who were fantastic ambassadors for the school from start to finish.