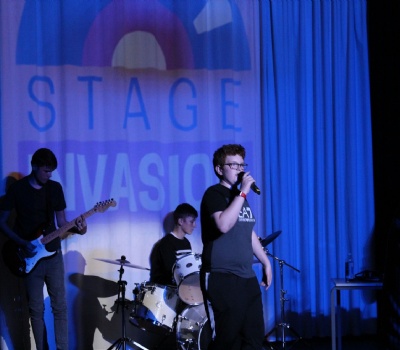 Congratulations to Villis and Phoenix.

The first ever Stage Invasion gig took place in the Faraday auditorium at Ridgewood last month. Over a hundred eager spectators came along to watch bands and performers from across school battle it out for the chance to play at the Doncaster Dome later this week.

The audience were treated to a spectacular show with a hotly contested fight for the title. All the contestants were fantastic, but judges declared that the winning bands were Villis and Phoenix.

These two bands will go onto complete a recording studio session at Higher Rhythm Studio, and then play a final gig at the Dome on Thursday 4 July.

If you want to watch the bands play at the Dome this week, tickets are free and still available. However, you must have a ticket to get in to watch the event. You can buy tickets online. Doors open for the gig at 6:45pm on Thursday, and bands will be on stage between 7 and 9.30pm.

Good luck to Villis and Phoenix!